The Corinth Canal lies four kilometers east of modern Corinth. The idea of building a canal through the Isthmus of Corinth (which connects the Peloponnese to the rest of Greece) was conceived by the tyran Periander in the sixth century BC. However, it was only completed during the period 1882-1893, after modern Greece gained independence. Involving an excavation up to 80 meters in depth, the canal is 6.3 kilometers long, 23 meters wide, and eight meters deep, and can take vessels of up to 10,000 tons. The best view of the canal is from the bridge, which carries the road over it. An interesting feature is the movable bridge at the northwest end, which can be sunk below the surface, allowing smaller ships and sailing boats to pass through (paying a hefty tariff). However, it is too narrow for larger ships.

More information about the history of the Corinth Canal at: http://www.aedik.gr/frontend/articles.php?cid=44

Ancient Corinth was an important city-state of ancient Peloponnese. Once one of the most powerful cities of the Classical world, it came under Roman rule in 146 BC. It is here that St. Paul preached to the people of Corinth in AD 51-52, and his experience later inspired him to write the New Testament books of the First Corinthians and Second Corinthians, among the most quoted books of the Bible. Today, amid the archaeological excavations, you can see the ruins of various buildings including temples, a forum, baths, and a basilica. The focal points in Ancient Corinth are the archaic temple of Apollo, the road of Lecheou, Odeon, and the theatre. The site and the Archaeological Museum are open to the public.

Acrocorinth (Akrokórinthos) lies 3.5 kilometers south of Ancient Corinth. The ascent to the top of this impressive fortified hilltop (575 meters) is made easier by a road, which climbs to a point near the lowest gate on the west side. Acrocorinth was fortified in ancient times, and its defences were maintained and developed during the Byzantine, Frankish, Turkish, and Venetian periods, so that its walls now measure almost two kilometers in length. Within the fortress, a path leads to the highest point, to the former Temple of Aphrodite, which was converted into a mosque by the Ottoman Turks in the 16th century. From here, there are fine views of the Isthmus and the hills of the Peloponnese.

This small museum provides a comprehensive view of finds from the Ancient Corinth archaeological site. Built in 1931-32 and extended in the 1950s, the museum has three display rooms and a large courtyard. The main attractions are Neolithic finds, typical Corinthian pottery and ceramics, mosaic floors, and numerous headless marble statues (the ancients would simply remove the head of a deceased leader from a statue, and replace it with the new leader's head). Exhibits are labeled in both Greek and English. The entrance ticket to the site is also valid for the museum.

A crafted lake with unparalleled natural beauty that is suitable for many activities among tall mountain peaks and together with Lake Tsivlou in Achaia are two of the most beautiful lakes in the Peloponnese. Ideal for hiking or cycling around, and boldly diving with the appropriate diving equipment in the icy waters looking for the old iconostasis of St. Georgiou, which is submerged at a depth of 8 meters. It is located in the municipality of Feneos at an altitude of 880 meters. He is aged 10-15 years but for centuries in the wider region the rise of water from the floods caused problems, destroying cultivated areas and led to the transfer of the old monastery of St. George to its current location, well above its level today’s lake, at the end of the 17th century. The natural landscape around the lake is beautiful, as 3 towering mountains dominate the Peloponnese, Ziria, Helmos and Durdouvana. 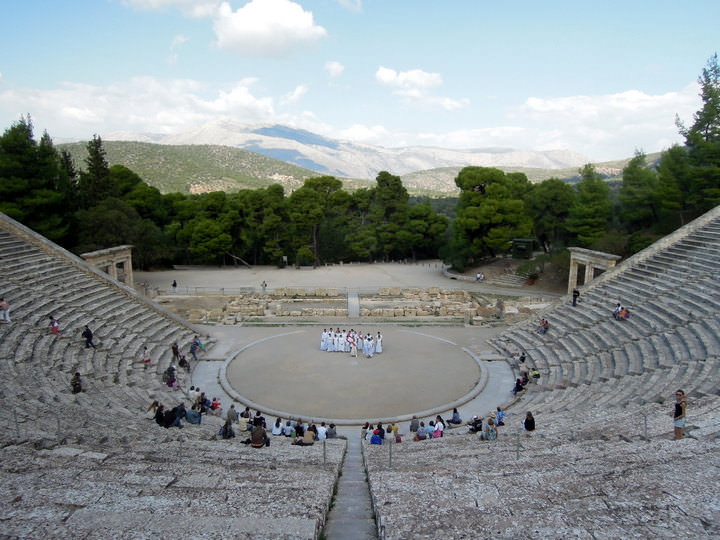 It is as historically fascinating as it is visually stunning. Regarded as the birthplace of Apollo’s son, Asclepius, who was a medical healer, the site was the most prominent therapeutic center in the Classical era. Today, visitors can see the remains of former guest and recovery rooms, and a sporting arena. There is a giant, impressive theater on the grounds that seats 1,500 people too. Sometimes plays take place in the theater, showing off the exceptional acoustics. Ask the guide at the ticket booth for details.